So there we were, flying in our airship when harpies attacked!

In our weekly Pathfinder game, the gang recently finished Feast of Dust, a desert adventure that saw the party defeat the Jackal Prince of Famine.

Our intrepid GM, Wooly Toots, has further plans for campaign, so our crew jumped onto their airship, the Iron Wind, to head to Omash.

We created a pair of crews made up of our adventuring party – Val, Egg, Gaan, Ajadeen and Tribad – as well as a group of hired NPCs including some iconic characters and no-name sailors.

I recently rejoined this campaign, and my new PC – a badass 14th-level monk – hasn’t yet been introduced, so I took the roles of a stormpriest and Lem, the iconic bard.

On the first shift, the GM rolled some dice. Random encounter!

It was harpies, but our perception rolls were crap. We had no idea.

Then their Captivating Song hit. My stormpriest made his roll. Lem didn’t. Several of the crew missed their rolls.

Gaan, our air wizard played by John Bunger, piloted the airship. He was just out of reach of the song.

You know what Captivating Song does? It calls those under its sway to the harpy’s side. In the case of an airship, it means they’ll pitch themselves over the bow in an effort to get to the harpies.

The Iron Wind was hundreds of feet in the air. We were all gonna die.

Those of us that weren’t captivated were getting our asses kicked by a host of harpies. (The party is level 14, but most were below decks sleeping and the NPCs maxed out at level 7.)

Just as one of the crew was walking down the bow and about to pitch himself into the abyss, the little bard struck up a countersong and suddenly we were back in control.

We later found the above image from Halflings of Golarion, and we had a good laugh.

My stormpriest called down a column of fire on one of the harpies, and Gaan critted on a couple Chain Lightning attacks. (When it hits, it deals 15d6.)

Even though we were starting to do damage, it wasn’t enough.

Then it came back around to Gaan. The wizard decided to summon some creatures. The wizard can add all kinds of attributes, so he made them flying and electric.

We thought about buying these jackets to commemorate the situation.

The tigers tore through the harpies.

Each rolled three attacks, and if some of them hit, they got additional attacks. (All had lightning damage.)

They hit a lot.

Gaan’s flying electric death tigers (as I’ve taken to calling them) destroyed the harpies. Combined with Lem’s countersong, the tiger attacks took them out before we lost any crew. 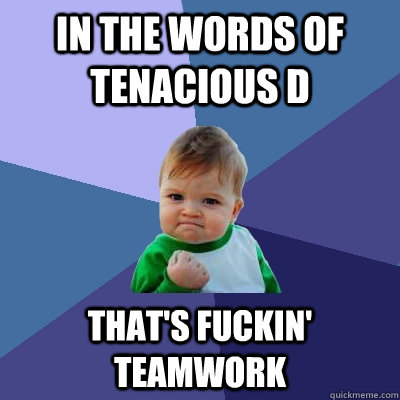 Do you have a fantastic tale from the tabletop? Tell us about it. We’d like to publish your stories of critical victories (and occasional critical falures) every week.